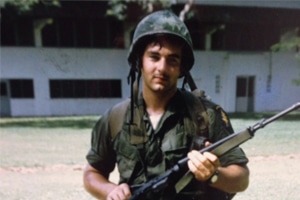 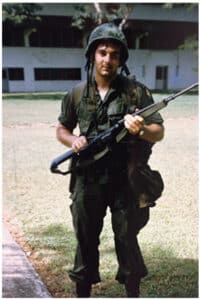 For Missouri State Representative Dave Griffith of Jefferson City, serving as a Green Beret with the 8th Special Forces Group in classified and humanitarian deployments to Panama, Honduras and Vietnam began to shape the life he would lead.

“When we came back from Vietnam, we weren’t treated well,” Griffith said. “It really hurt. For a long time, it wasn’t acknowledged we’d served. But the tide changed with 9/11. People value veterans’ service.

“Korean vets suffered much the same as Vietnam vets,” Griffith said. “Those guys were true heroes. My cousin served. Talking to him, the conditions they faced were terrible.

“When I was asked to carry the torch to work for a Missouri Korean War Veterans Memorial, I was all in from the beginning,” Griffith said. “Monuments are something that stand forever. You can take your grandkids to the monument and say, ‘This is what it means.’ “

“Service is what led me to where I am today,” Griffith reflected, “the leadership skills you learn and the focus on the mission at hand. For so many serving, separating from the military is hard and too many fail to find a new mission in life. I guess I’ve been a volunteer all my life.”

In 2010, Griffith made his first successful run for elected office, winning a position to serve on the Jefferson City Council and learning how government works on a microscale. By his second term however, the American Red Cross was calling.

For Griffith, the military skills he honed – leadership and commitment to seeing a mission through served him well as he took the reins as Executive Director for the American Red Cross in Missouri. He was again deployed to meet challenges – three hurricanes and two major floods. 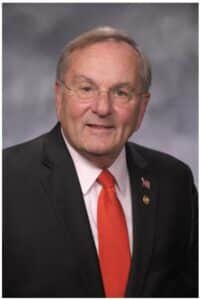 “Sometimes it felt like we were ‘drinking from a fire hose.’  But we knew the work we did every day saved lives and had a tremendous impact for people,” Griffith said, recalling his deployment to super storm Sandy in New York. “We saw the magnitude of Sandy’s impact on New York, but we also saw a community coming together to take care of each other.”

In 2017, Griffith set his sights on serving in the Missouri Legislature.

“The first year, my wife and I knocked on 10,000 doors,” he said. “It was a stiff, three-way primary. I’ve never taken anything for granted.”

Griffith thought he could make a difference serving on Missouri’s House Veterans Committee. He became the first freshman legislator appointed to serve as chairman.

“Once you go into battle, it changes you,” Griffith said. “Veterans try to compartmentalize and go on with life.”

Griffith continues to push hard for sufficient budgets to meet needs, including support for the Missouri Veterans Commission. A personal priority is securing passage of a bill that would exempt service-disabled veterans in Missouri from personal property tax. 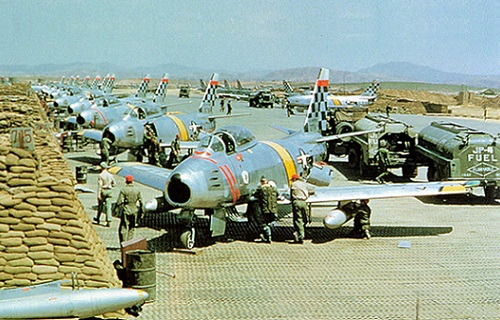 While air power played a vital role in the Korean War, its function is often portrayed as less significant than that experienced in WWII. However, quick dismissal of the air war must be tempered by the understanding that vital historical resources remain inaccessible in foreign government archives and that the conduct of the air war has never been subject to detailed historical analysis. Furthermore, resources which are available bias towards their specific remit or are concealed within larger service/historical narratives.

The Korean War air campaign largely centered around three main roles: Air superiority/interdiction, strategic bombardment, and close air support. During this first conflict of the emergent Cold War, the nascent US Air Force (USAF) both would fly fewer sorties and would drop fewer munitions compared to the Second World War. The US Navy (USN) and US Marine Corps (USMC), focusing on close air support (CAS) compared to the USAF’s focus on interdiction and strategic bombardment, would fly nearly equivalent numbers of missions to those of WWII while dropping some 75% more bomb tonnage. Moreover, the number of overall sorties flown by both sides saw an unbalanced deployment of airpower. UN Command (UNC) flew some 700,000 sorties (US pilots accounting for 93% of these sorties) compared to the 90,000 sorties flown by Communist forces. The limited number of Communist sorties likely results from the USSR’s intention to limit overt, full military assistance to the Democratic Peoples’ Republic of Korea (DPRK) and the Peoples’ Republic of China (PRC) / Chinese Communist Forces (CCF) in an attempt to contain the conflict to the Korean peninsula.

Caught by the surprise and force of the DPRK’s 25 June 1950 invasion, Republic of Korea (ROK) forces and their US advisors initially operated a confused withdrawal toward the southeast of the peninsula. However, the initial shock of invasion soon turned into a concerted defense around Pusan. Critical to the stabilization were aerial assets both within the ROK and those based in Japan. Air superiority over the DPRK air force was gained within a month. The establishment of air superiority re-opened debate on the application of air power. USAF leadership promoted establishment and maintenance of air supremacy, interdiction to slow or halt Communist movements, and strategic bombing to blunt Communist war-making ability. US Army, Navy and Marine Corps leadership desired continued close cooperation of air and ground forces. The debate on which aerial strategy to prioritize largely reflected the present status of the war. More broadly, the debate was deferred by moving forward with all options at varying intensities.

The UNC air superiority gained through the warring powers’ numerical and technological imbalance did not go uncontested. General McArthur’s failure to heed his command’s intelligence, Washington’s directives, and PRC warnings saw him commit UNC forces up to the Yalu River in October 1950. The perceived danger of US forces on the border of Manchuria saw Beijing make good on its thinly veiled threats and commit PRC ground and air assets to the on-going conflagration. CCF intervention brought vast resources to support North Korea’s continued survival. First UN contact with CCF forces came in the vicinity of Unsan on October 25, 1950. Soon Communist presence was manifest in the skies with the introduction of Soviet-piloted jet aircraft. The new Soviet-developed MiG-15 swept wing, jet-powered aircraft eliminated established UNC air supremacy. The older, piston engine aircraft deployed by the US were soon replaced with the more advanced jet-powered aircraft including the F-86 Sabre, a swept wing fighter comparable with the Soviet MiG-15. While the early imbalance of piston versus jet combat was keenly felt, the limitation on range provided some stabilization. 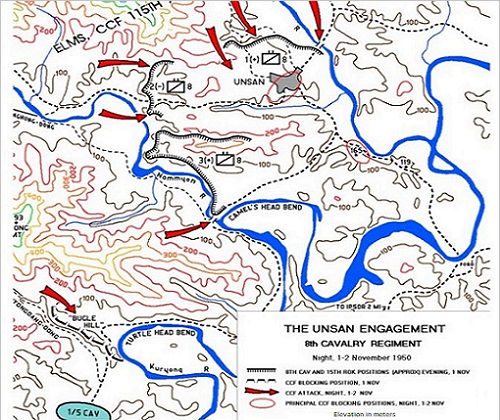 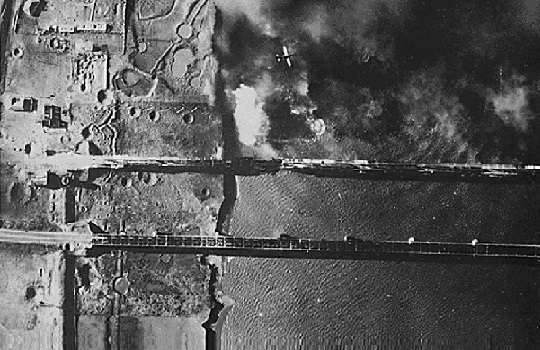 Most contests for air supremacy, both piston-versus-jet and jet-versus-jet, were concentrated near the northwest DPRK-PRC border (i.e., the Yalu River). This region—generally bounded by the Yellow Sea, the Ch’ongch’on River and the Sui-ho Reservoir—came to be known as MiG Alley. Communist forces benefitted from nearby bases, concentrated air defenses, and increased flying times due to closer proximity to the active combat area. Conversely, UNC forces had limited loitering time due to more distant air bases. The limited patrol time of approximately 20 minutes meant that much of UNC efforts dedicated to re-establishing and maintaining air supremacy were defensive, patrolling airspace or reacting to Communist incursion flights. Efforts by the Communist forces to expand their movement in concert with the Chinese-directed offensives of late-1950 and 1951 were aggressively crushed by UNC air attacks.

Component to re-establishment of UNC aerial supremacy were incursion flights into PRC airspace. Officially, the UNC prohibited “hot pursuit” of Communist aircraft operating north of the Yalu River. However, in theater this limitation was often ignored with UNC airmen quietly pursuing Soviet/DPRK/CCF aircraft inside Manchuria, patrolling Manchurian airspace for targets of opportunity, and engaging CCF bases and air defenses. Few MiGs were observed outside the northern border regions—MiG Alley in particular—following the 1951 UNC spoiling missions. UNC air superiority, initially won through a numerical and training imbalance, was re-established and maintained through a combination of better training, better experience, and more aggressive pilots.

More critical to the daily prosecution of UNC operations was effective application of tactical air support. While the USAF advocated for airspace interdiction and strategic bombardment as the primary role of airpower on the ground, it was CAS that more often saw aircraft engage with ground targets. The quantity of historical research into CAS is more limited than that discussing the role of air-to-air combat or strategic bombardment. However, available scholarship on the subject (Edwards 2010: 85, 87) reinforces the central role of CAS in the air war (accounting for approximately 15% of all UN sorties) and provides CAS as assisting in stabilizing UNC lines during critical points. The steady withdrawal to the Pusan Perimeter in July/August 1950 and the maintenance of the same was greatly assisted by CAS aircraft. During the Pusan fight, CAS is credited with inflicting equal enemy casualties as ground assets while destroying nearly three-quarters of DPRK mobile equipment and artillery. Likewise, during the Battle of the Chosin Reservoir, CAS is credited for 50% of CCF casualties. While CAS aircraft provided critical tactical support to ground forces, proximity to enemy infantry and air defenses negatively affected loss statistics. 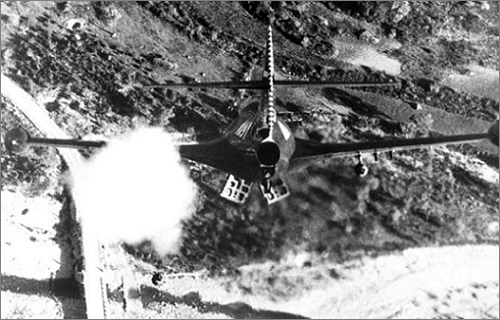 Information on the air war in Korea lacks the fullness of preceding and following aerial campaigns. Nonetheless, specific trends emerge. The air war over Korea reflects the maturation of piston aircraft technology during the Second World War, the strategic contest of emergent jet and rocket technologies during the early Cold War, and the political restrictions of a limited geographic conflict. Concern over the entrance of the USSR and the People’s Republic of China (PRC) into the conflict—and the possible expansion of the conflict from the same—dictated UN strategic focus for much of the Korean War. The eventual entry of the PRC into the conflict modified the UN/US air campaigns from predominantly close air support, interdiction, and strategic bombing to also include establishment and maintenance of air supremacy. The skies over Korea provide a critical linkage between established Second World War and developing US Cold War air doctrines.

During the Korean War air campaign, the US suffered 2,714 aircraft destroyed and 4,055 service personnel killed. The circumstances of air losses in the Korean War drive much of the on-going research focus. While much of the early war was fought within the ROK, the majority of the conflict—especially the air war—was fought within the DPRK. Therefore, the geographic location of air losses presents accessibility challenges. Archaeologically, air losses are often single site, high velocity impacts of diminutive size. Fragmentation and burning of aircraft, as well as post-war site clean-up, presents additional challenges to site location and recovery. Moreover, losses related to undocumented “hot pursuit” both on the DPRK-PRC border and within the PRC present substantial historical and archaeological research challenges. The DPAA has completed 57 Joint Field Activities (JFAs) in the ROK to date including collaborative historical and archival research and site identification, survey, and excavation programs. The DPAA completed 33 JFAs in the DPRK before temporarily suspending in-country research in 2005.