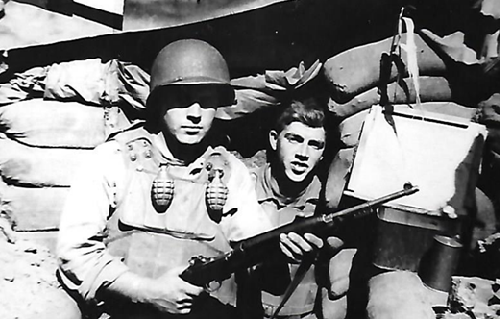 Fighting alongside the 38th parallel from the summer of 1951 to July 1953 was exceptionally costly in lives and treasure. Over 40 percentof U.S. Marine casualties in the entire war took place during this period of fighting. U.S., Chinese, and North Korean forces fought over places with names like Bloody Ridge, Heartbreak Ridge, and Pork Chop Hill. All the while the peace talks moved at a glacial pace as negotiators fought over prisoner of war repatriation and other issues.

Armistice negotiations, started in July, came to a pause in August 1951 after Chinese and North Korean leaders recessed them. In that breach, Van Fleet sent the X Corps and Allied forces to capture key positions near the Punchbowl, Bloody Ridge, and Heartbreak Ridge. While North Korean forces fought hard to keep their positions, they could not stem the U.S. onslaught. Truce talks resumed at the end of the campaign in October 1951.

Concessions by Chinese and North Korean leaders at the peace table over the division of Korea encouraged the hope that a peace was at hand in the last days of 1951. U.S. forces sought an active defense that involved patrolling, small-scale fighting, and air strikes into the spring months of 1952. Significant casualties would be endured in these smaller engagements.

By the summer of 1952, the pace of fighting increased. In June 1952, the 45th Infantry Division launched OPERATION COUNTER in an effort to take positions at a higher elevation. Successful execution of COUNTER led to the capture of Old Baldy and Pork Chop Hill, among others. These outposts became contested areas, as Old Baldy allowed wide surveillance of the area and Pork Chop was a part of Old Baldy’s security. U.S. forces endured many casualties taking and then holding these hills over 1952.

Toward the end of the summer 1952, U.S. Marines waged a bitter defense of an outpost that would be named Bunker Hill. On August 8, 1952, a Chinese company pushed a squad of Marines from the 1st Marine Division off a nearby hill, Outpost Siberia. Marines on the ground knew they could not allow Siberia to be lost forever as it enabled the Chinese to more precisely fire artillery and mortars at the Marine position. Back-and-forth fighting over Siberia led Marine leaders to look to Bunker Hill as they believed it would help put pressure on Siberia and would grant Marines the ability to watch movement behind Chinese outposts. The Marines captured Bunker Hill at approximately midnight August 11, 1952.

Initial success for the Marines was followed by rigorous Chinese challenges. A reinforced Marine Company turned back a Chinese battalion-sized attack. By late October, Chinese forces focused on the “Hook,” a part of the Main Line of Resistance (MLR) that could give the Chinese direct access to Seoul. On October 26, 1952, the Hook and a number of outposts near it fell to Chinese forces. Two days later, Marine forces broke the Chinese hold on the Hook.

Chinese attacks over the summer of 1952 motivated a new American offensive near Kumhwa. Known as OPERATION SHOWDOWN, the 7th Infantry Division and allied units attacked the Triangle Hill Complex on October 16, 1952. Ferocious Chinese attacks over the rest of the month and into early November denied U.S. and Allied forces a permanent position. Official estimates put U.S. and Allied losses at 9,000 casualties and Chinese losses at 19,000. As 1952 came to a close, both U.S. and Chinese forces showed their willingness to pay a high price to hold onto outposts at their frontlines.

As the Chinese attacked Old Baldy and Pork Chop, they advanced on the Marine controlled part of Korea. On March 26, 1953, Chinese forces overran Outpost Vegas and Outpost Reno, locations a few miles from the Hook. These hills, along with Outpost Carson and Elko, were known as the Nevada Complex. In response to the Chinese attack, the Marines concentrated on Outpost Vegas. On March 28, 1953, the Marines recaptured Outpost Vegas. A month later, the 25th Infantry Division replaced the 1st Marine Division in the area. On May 28, 1953, Chinese forces attacked Turkish allies that were defending the complex. After Carson fell, the 1st Battalion, 14th Infantry Regiment, of the 25th Infantry Division, was put into the fight. The bloody confrontation that followed caused Allied forces to abandon Vegas and Elko.

Progress at the peace table directly related to U.S. and Chinese choices during these campaigns. On the U.S. side, Maxwell Taylor, Commander Van Fleet’s replacement in the 8th Army, questioned costly showdowns when peace seemed so close at hand. For the Chinese, the attacks on U.S. positions could secure a better position at the front as the armistice agreement would solidify where the forces were. Holding hills like Old Baldy and those that made up the Nevada Complex denied U.S. forces valuable surveillance positions. To that end, Chinese forces launched one last large attack on Pork Chop Hill in early July 1953. After a bitter defense by the 7th Infantry Division, U.S. forces retreated from the Hill. On July 27, 1953, the armistice was signed, stopping the war but not ending it. The inconclusive nature of the armistice agreement would cast a shadow over efforts at remains recovery from 1953 to the present.

By the terms of armistice, a Demilitarized Zone (DMZ) was created between North and South Korea along the 38th parallel north. Within this area are the remnants of key hills and outposts. Despite the location of these confrontations, remains recovery operations have made some progress. North Korean and U.S. military authorities have conducted exchanges of remains and information. In 1954, North Korean representatives returned the remains of over 3,000 Americans under the auspices of Operation Glory. From 1990 to 1994, North Korean representatives repatriated 208 boxes of human remains that Department of Defense scientists estimate may hold over 400 individuals. North Korea provided U.S. researchers with documents and artifacts related to recovery of U.S. remains in 1997, 1998, and 1999. Similarly, the Chinese government has reported information on unaccounted-for remains from their archives. In 2018, the North Korean government turned over an additional 55 boxes reportedly containing remains of U.S. servicemen killed during the war

Research continues at a steady pace in the United States. Specific focus has been given to collecting testimonies from Korean War veterans who might have witnessed the loss of specific. For the Nevada Cities campaign, over 20 veterans have provided testimony to the DPAA. From 2017 to the present, a partner at the Ohio State University has collected testimony from 10 veterans who served on either Elko Hill or Pork Chop Hill. Historians and other researchers have shared their extensive research on the DMZ battles with the DPAA

Actual remains recovery within the DMZ has been modest. North Korea has never allowed any remains recovery missions on their side of the DMZ. The DPAA has recovered some remains from the Allied portion of the DMZ. Further, the DPAA works closely with the South Korean Ministry of National Defense Agency for Killed in Action Recovery and Identification on recovery missions close to the DMZ.