The Memorial – Thanks Senator Mike Cierpiot 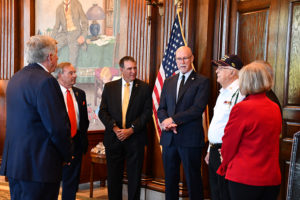 The Missouri Korean War Veterans Memorial in downtown Kansas City owes a debt of gratitude to Missouri State Senator Mike Cierpiot, a Lee’s Summit, MO., legislator and businessman who led the effort to have the memorial named the official Korean War memorial for the state.

Cierpiot’s involvement came through a friend-of-a-friend who urged the senator to take up the challenge of having the memorial certified as the official state tribute to the 900 Missourians who died in Korea from 1950 to 1953.

To make that recognition happen, an act of the state legislature was necessary.

“There are a number of Korean War memorials around the state – one in St. Louis and other places – but most of those are dedicated to the men in their particular counties who died in the war,” Cierpiot said. “The only memorial that lists all the Missourians who died is here in Kansas City. We wanted to acknowledge that.”

While construction on the memorial and park was completed in 2011, certification didn’t come until several years later at the urging of the memorial’s board of directors.

Asking the legislature to designate the Kansas City memorial as the official state site (Senate Bill 656) was “a pretty easy lift,” Cierpiot said, with little opposition. The certification was approved in 2020.

“Senator Cierpiot’s leadership was crucial to the memorial’s recognition,” said Debra Shultz, chairman of the memorial. “The certification will really allow us to honor the Missourians and all the Americans, and Koreans, who gave up their lives for freedom.”

Cierpiot said that, like many others, he had not been aware of the memorial garden.

“It’s really quite an impressive thing,” he said. “It’s a shame it’s not better known.”

Construction of the memorial was funded by private donations on land donated by the Kansas City Parks and Recreation Department. The state designation will help the non-profit by allowing it to apply for specialized grants. Money raised will be used for increased sculpturing at the site,
and to enhance awareness of the memorial and urge visitors to include the park when touring Kansas City.

The memorial is located in Washington Square Park, 174 East Pershing Rd., in downtown Kansas City, in the area of Union Station, Crown Center and the World War I museum.